Health Well-being – Why is there so much disease and illness in the world? 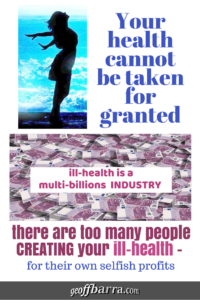 It is an inescapable fact that as ‘advances’ in ‘medicine’ are (supposedly) being made,
there are more people suffering poor health well-being than ever before.

Do you question this – (as you should)…?

Ah, of course the reasons are that…

There are too many problems, and too much stress, in modern life.
As well as too much pollution (we are ruining our own world)…’we’?
Human Beings are only very fragile creatures.
Why should we care, life is shite anyway, so simply enjoy whatever
you can, while you can.

All these things are, of course, partly responsible for the current chronic state of the health and
well-being of so many people in the world, and which are deliberately created to cause ill-health.

‘We’, you and me, DO NOT pollute the Earth by-the-way.

The human body is not fragile

Our world is a living, vibrating, ever renewing, entity and it can easily cope with normal
human activity even the selfish, and inconsiderate to nature, behaviour of the minority.

The only ones causing serious and harmful pollution on Earth are the greedy and ruthless
profit-motivated corporations that are effectively in control of the world.

The MAIN reason for so much ill-health nowadays is that we are being ‘taught’
to kill ourselves earlier than should be the case. The human body is NOT at all fragile.
IF it was in harmony with nature (which has been made virtually impossible in modern times) the
human body could last well over 150 years.
It was designed to.

So, why are they training us to end our own lives early? …

Our natural food (fruits and vegetables and live stock) are all polluted with chemicals and
unnatural gene modification and hormones to make them as toxic as possible.

All manufactured food is designed for only one thing, and it is not for human nutrition.
Yes, you guessed it – it’s for PROFITS…my boy! 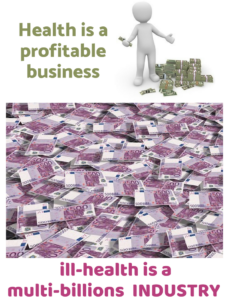 Your Health and well-being is under constant attack

The usual process for developing new medicines is to discover which plants
(that grow naturally, a gift from Nature) heal what. Nobody can put a patent on a
naturally growing plant, so there is no point telling everyone to find the plant and cure
themselves of whatever ailment, because they cannot make any PROFITS doing that.

So corporations embark on the expensive but ultimately highly profitable, course of trying
to mimic the plant’s natural benefits, with manufactured chemicals which CAN be patented
and sold at a premium.

Man-made chemicals cannot ‘cure’ anything, because all unnatural chemicals disturb the
vibration frequencies of human cells. The body cannot fully absorb any man-made chemical and the
residues of all manufactured chemicals become stored on the body as fat.

Manufactured chemicals can disguise and reduce the symptoms of an ailment or disease.
Then often (if the ailment is relatively minor) without the stress of the pain-giving symptoms,
the now more relaxed body will heal itself.

That’s okay then – what’s wrong with that?

The problem is that all pharmaceutical drugs (chemical medicines)
have hazardous side-effects.

Everyone, even with only half a working brain (the other half dumbed down
by TV and mass propaganda) can see that health (or rather ill-health) is a multi,
multi-billion dollar per year industry.

Of course, NO one involved in this multi, multi-$billion per year industry wants it
to end. IF they cured people of disease and whatever ails them. Who will buy the highly
profitable ‘medicines’?

Modern medicine, far from being responsible for any health improvements, is in actual
fact, the world’s greatest threat to human well-being and longevity.

And for only ONE reason = Profits…my boy!

Actually, there is in fact another deeper, even more heinous, reason for so much
serious ill-health in the world.

The real rulers of Earth are hell-bent in their openly admitted quest
to ‘cull’ the worlds population down from around 5.5 billion down to .05 billion.
(5.5 billion people on Earth is probably a more accurate assessment of the world’s population
than the ‘scary over-population’ mainstream projection of 7.5 billion)

However, that’s a narrative for another time…

Take control of your own health and well-being

(there is a time and place for a Doctor)

but ultimately YOU are responsible for your own good health

This course will lead you to better health…